The SM42-6Dn locomotive is propelled by four traction engines of 180 kW each. Fuel is supplied from two 85-kW hydrogen fuel cell modules manufactured by Ballard. Energy is generated as a result of a chemical reaction between the hydrogen and atmospheric oxygen. Each storage tank holds 175 kg of hydrogen. The locomotive is designed to operate for 24 hours on a single refueling.

SM42‑6Dn is equipped with an automated system that allows the locomotive to be run by a single operator. The locomotive also features an obstacle detection and recognition system.

Following further testing, the company plans to launch the locomotive into operation at an oil refinery in Płock, Poland, in 2022.

In addition, PESA Bydgoszcz is involved in the development of the Regio 160 new product line as part of the program aiming to produce passenger rolling stock with a low level of emissions into the atmosphere. As part of these efforts, design and development work is in progress on trains that will be capable to be powered by both overhead contact system and storage batteries, as well as on fuel cell powered trains. The first hydrogen-powered trains are scheduled to be commissioned into operation in the late 2025 – early 2026. 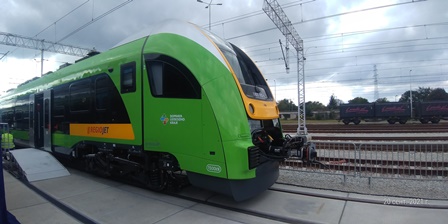 At the TRAKO fair, PESA Bydgoszcz SA also showcased yet another specimen of innovative rolling stock: the Elf EU electric multiple unit that the company built under a contract with RegioJet, a private railway undertaking from the Czech Republic. The contract to deliver seven such trains had been signed in March 2019.

The Elf EU, a 53-m long two-coach dual-system electric multiple unit – capable of running on either 3 kV DC or 25 kV AC lines – is an export version of Elf 2 trains already in operation in Poland. One of the two coaches is a motorized driving unit, and the other is a trailer. The Elf EU seats 154 passengers and is designed to operate at speeds of up to 160 km/h.

The EMU trains are scheduled to be commissioned into operation in the Ústí nad Labem urban area of the Czech Republic in the latter half of 2022. The commissioning will be preceded by setup and start-up work at the Velim Test Center in Czechia, and a certification procedure. The new trains of the 654 series will replace the DB Class 628 diesel trains that are used on a temporary basis and were previously operated on railways of Germany.